Former WWE Superstar Santino Marella discussed some very interesting things about his life during and after wrestling, as well as his upcoming charity events. 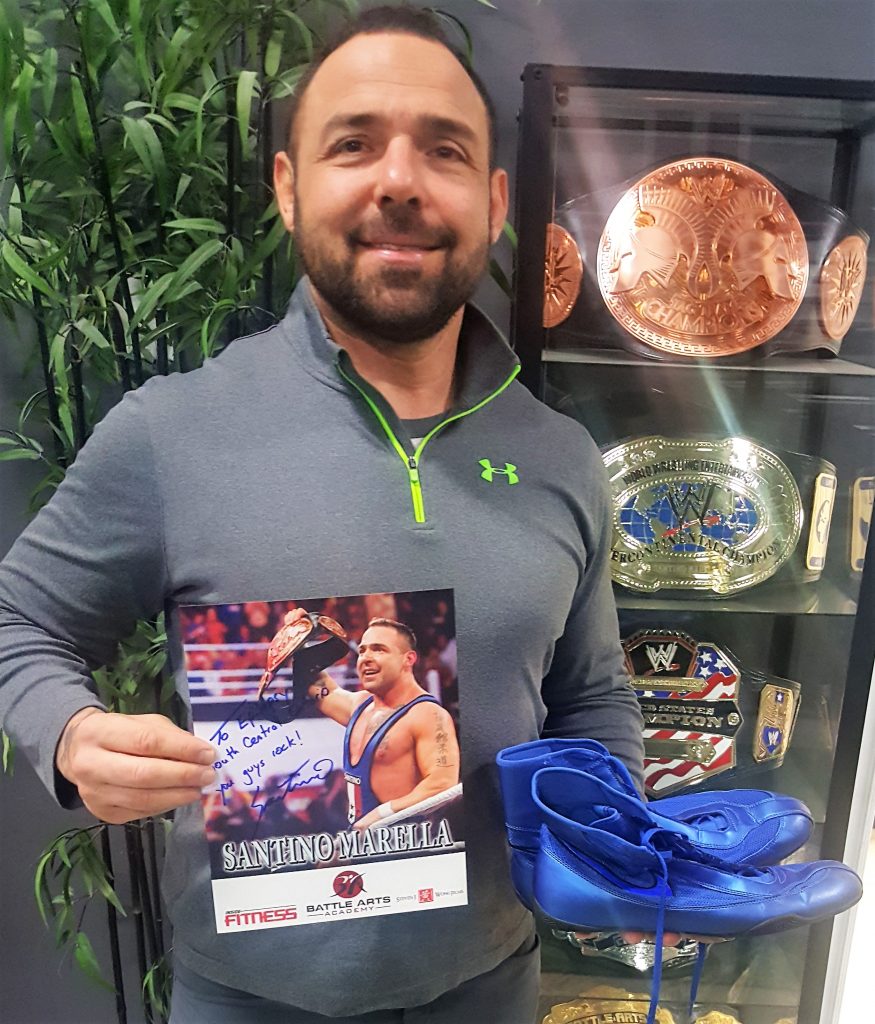 Santino Marella was one of the funniest and most entertaining superstars in WWE during his career. His main event career started in 2007, when he was pulled out of a crowd in Milan, Italy, as a surprise challenger for the Intercontinental Championship. In a shocking twist, Marella (whose ring name was a tribute to WWE Hall of Famer and former commentator Robert ‘Gorilla Monsoon’ Marella) defeated then-champion Umaga for the title.

From then on, Marella was a fixture of WWE programming as one of its most comedic stars. He played the role of an Italian-American stereotype, often speaking in broken English to accentuate his Italian roots. Many people enjoyed watching him on a weekly basis, with his ridiculous, over-the-top comedy.

Of course, Marella was actually quite successful while wrestling in WWE: he won the WWE Intercontinental Championship twice, the United States Championship once, the WWE Tag Team Championship once, and the now-defunct Miss WrestleMania award twice. He has also been praised for his work by outside observers as well, winning the Wrestling Observer’s ‘Best Gimmick’ award twice in a row, in 2007 and 2008.

Like many professional wrestlers, Marella (real name Anthony Carelli) likes to give back to the communities that have helped him become a star. This is why I am proud to announce that there will be an opportunity for wrestling fans to bid on some Santino Marella memorabilia.

He has donated a pair of wrestling boots and autographed photos, which will be up for auction at the 5th Annual Purple Gala at the Credit Valley Golf and Country Club in Mississauga, Ontario, on Saturday, March 25th, 20170. The proceeds from this will be going to help support Epilepsy South Central Ontario.

This is a golden opportunity for wrestling fans in the GTA to get involved in a great cause. Tickets for the Purple Gala are $125.00 per person, which can be purchased on their website at https://epilepsysco.org/. Proceeds from the event will go to supporting local Youth programs and summer camps for kids.

In preparation for this event, I asked Mr. Marella some questions so that people unfamiliar with his work can get to know what it’s like to be a professional wrestler, and what charity work means to him.

Firstly, what drew you to become involved with the Purple Gala? Is there something specific about this event or charity that speaks to you more than others?
I was drawn to it because I saw that it was a great cause. I researched the charity and what it’s for, and thought that it was definitely something I wanted to be involved with.

Are there any other charities that you’re involved with?
I work mainly with my own charities, and collect food for food banks. The ones I’m involved with are Joshua House in Tampa, Florida, World Vision Canada, and the Jumpstart Program in Canada

In case anyone will be interested in attending the event, what will you be donating for the auction at the Purple Gala, and do any of these items have any special value or meaning?
I’ll be donating a pair of boots down during some of the best years of my wrestling career. They’re actually boxing boots, but I used them while wrestling.

What makes Battle Arts Academy stand out from other training facilities? Is there a specific program or philosophy that you and your staff focus on when working with your clientele?
I designed the facility to match my dream and what I like. There is a pro wrestling arena inside the facility in which we put on our own shows. At Battle Arts, we offer programs for grappling, which is for the heart and soul; striking, MMA, and athletic conditioning to work on attributes to get someone to higher levels. Essentially, it’s a one-stop shop for MMA fighters and pro wrestlers, and you don’t have to go anywhere else.

So now let’s segue into your professional wrestling career. What is your fondest memory of your WWE career?

I really enjoyed the European tours, being all together on the bus, city to city. Normally for travel, we usually rode together in cars with the same people on a daily basis. But when we were in Europe, all of us [the WWE roster] rode together on a bus. So it was great to be together with more people as we went from city to city in one big bus together. You tend to bond with your riding partner a lot when you’re traveling together so much, but it’s better when you’re all together on a bus. They even provided us with beer and wine for the bus as we traveled, which made it even more fun.

I’ve noticed you on the Aftermath program recently. How are you finding that?
I absolutely love it. They’re a great group of professionals, and being on the show is lots of fun. I DVR the [WWE] product, and it’s nice to watch to see where things are going now.

You’ve managed to become rather famous in terms of the Royal Rumble. You currently hold the record for shortest elimination in Rumble history, and nearly won the whole thing in 2011. Could you say some more on those experiences?
Actually, that 2009 Rumble match was a stressful experience. I knew I was going to be eliminated quickly, so I had to do it perfectly. Timing was everything, so I needed to be very careful and make sure nothing was screwed up.
As for the 2011 Rumble, that was a lot of fun because we almost swerved the entire audience.

According to an online wrestling championship page, it says that you won DDT’s Ironman Heavymetalweight Championship in August of 2016. Can you elaborate on what that was like?
That was fun. I held that title for only two minutes, though. I was going into that match to do a comedic role, and lost the belt to another guy. It was a great opportunity because I wanted to support up-and-coming talent.

What was it like teaming with Emma?
Partnering with her was done to help her out and bring her to the main audience. There was a big difference for her between the NXT audience and the main roster. The audience in NXT is so gracious and giving. They give so much noise that they give a false impression of what works and what doesn’t. So she was over there, but not so much on the main roster.

How much freedom were you given for your promos? Were you forced to follow a script or did they allow you do make up your own lines?
I was scripted at first, and the guy that wrote most of my scripts was Bryan Gewirtz. But over time, they gained confidence in me, so they loosened the grip, which allowed me to come up with my own stuff. By that point, for promos they’d give me a bullet point and they’d ask me to say it in ‘Santino’s way’.
On that note, one of the funniest lines I’ve ever heard Santino say was when Kane was looking for CM Punk and approached you, and you responded, with deadpan seriousness, ‘Have you tried the Pepsi machine?’ That was hilarious. Was that something you came up with on your own or was that scripted?
That particular line was scripted.
And do you have a favorite moment or segment that you came up with by yourself?
My favorite thing comedy-wise was when I stole Jerry Lawler’s sandwich from ringside.

Do you have any interesting road stories you’d like to share?
There was something funny happening every day. I rode mostly with Brodus Clay, and we did whatever we could to make the drives more fun. The conversations we had were always funny and light-hearted, so it was good times all around.

I’ve read that WWE’s travel schedule can be pretty hectic. At one point, the wrestlers were on the road 300 days a year. Is that still the case, or has it changed?
Yeah, it’s tough. You’re only home for a day and a half per week; and once a month you’re gone for the whole week. All the traveling and work really took its toll on you, since you were basically gone 25 days a month. But the Brand Split has made a huge difference. Now, the wrestlers have 2.5 days per week of home time, which helps a lot in staying healthy and keeping your batteries charged.

So, what did a typical work day look like for you?
So let’s use Friday as an example. I’d get to the airport at 6am, and then get to whichever city we were in that night at around 1pm. From there we would need be in the building for the show around 5:30pm, so between the time we arrived and show time we’d have 3-4 hours to get important stuff done. Usually that meant meeting up with my riding partner, getting a bite to ear, get a workout in, stuff like that.

At 5:30, we’d get to the building to get ready for that night’s match, do warm-ups, and then go do the match. Once the show was over we’d drive to the next town, which was usually up to four hours away, so normally we’d get to that town by 4am. Then we’d have to be in the building by 5pm the next day.
All that said, Sundays were different because the shows start at 5pm instead of 7pm. Because of that, you needed to have a riding partner that functions and thinks just like you do.