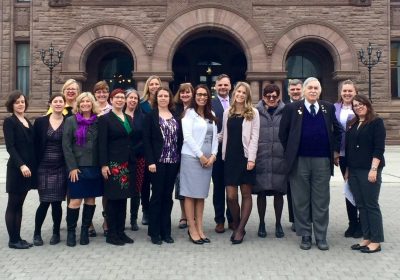 By Deron Hamel
Epilepsy Ontario executive director Paul Raymond says the success of the sixth Epilepsy Action Day at Queen’s Park on Feb. 28 was the overwhelming engagement from MPPs and policy makers had about the agency’s epilepsy care advocacy agenda.

For instance, one of Epilepsy Ontario’s requests was for support of community agencies through a community epilepsy liaison role, something that has been recommended by the ministry-funded Epilepsy Implementation Task Force, but not yet funded.

MPPs gave Epilepsy Ontario “very distinct strategies” on how to move forward by using vehicles such as petitions to help the Ministry of Health and Long-Term Care and health critics understand why there is a need to create the community liaison role.

“This was also really well-received by the MPPs and their staff because we were community-based advocacy agencies coming in and asking for funding, not for us, but to an already-funded ministry program, because we value the importance of the OBI and EpLink in Ontario,” Raymond says.

EpLink, a provincial epilepsy research program funded by the OBI, is conducting research to find new treatments to stop seizures and new strategies to improve quality of life for people with epilepsy.

Epilepsy Action Day 2017 had widespread representation from across all regions of Ontario, which Raymond says was encouraging to see.

There were six teams of volunteers and staff from Epilepsy Ontario agencies comprised of 20 volunteers from 9 of the 13 community agencies attending the event. Representatives met with more than 40 MPPs and their staff.

Jo-Anne Welton, a woman from North Bay whose son has Dravet syndrome and who is an advocate for people with epilepsy, was a speaker at the reception this year. Welton is also an Epilepsy Ontario volunteer.

The purpose of Epilepsy Action Day is for representatives from Epilepsy Ontario and the community based support agencies to meet with MPPs to discuss the needs of people living with seizure disorders and what role government can play to improve the quality of life for those living with the condition.